SAN FRAN — Seasoned announced that it has raised $18.7 million in Series A financing to help expand its hiring platform and restaurant worker network to new markets. The financing comes on the back of a $12 million seed round raised in June 2021, bringing its total raised to more than $30 million this year.

In July 2020, Seasoned relaunched with a next-generation, mobile, app-based recruitment and hiring tool for restaurants that complements its employee networking platform. On the back of releasing this next generation hiring product in Dallas, Seasoned has partnered with more than 300 national and local restaurant brands that own and operate more than 100,000 locations across the country, and has added Houston, Austin, Orlando, and Miami to its platform.

“We know from every restaurant owner that we talk to that hiring is their number one challenge, and with millions of people searching for jobs, we can make a real impact,” said Ware Sykes, CEO of Seasoned. “This funding will help us expand to new markets, further develop our products, and ultimately get more people employed.”

Seasoned’s Series A financing was led by Horizons Ventures, with participation from TPG Growth and existing investors. The proceeds from the financing will be used to support Seasoned’s expansion into new markets and continued enhancements to its products.

“We’re in a unique situation; restaurants cannot hire fast enough, but millions of people are still out of work. In Seasoned, we see a huge opportunity to address that challenge at a time when the industry needs it. We’re looking forward to an exciting year of growth,” said Bart Swanson from Horizons Ventures.

Seasoned provides two core products: a community for industry employees to review openings, schedule interviews themselves, and connect with their peers for advice and guidance, alongside an app-based hiring tool that dramatically reduces friction, accelerates time to hire, substantially lowers restaurants costs, and frees up managers time.

Seasoned empowers every hourly professional to achieve financial security, health, and happiness in life, while positively impacting their industries and society.  Seasoned is the only social community exclusively for service industry workers near you. Workers use the Seasoned app to get interviews fast for local jobs and get daily support and advice from their service industry family. Business owners use Seasoned Recruit to hire service workers in as little as 24 hours from our community of top restaurant talent.

HourWork Gets another $2.5 million in Series A funding 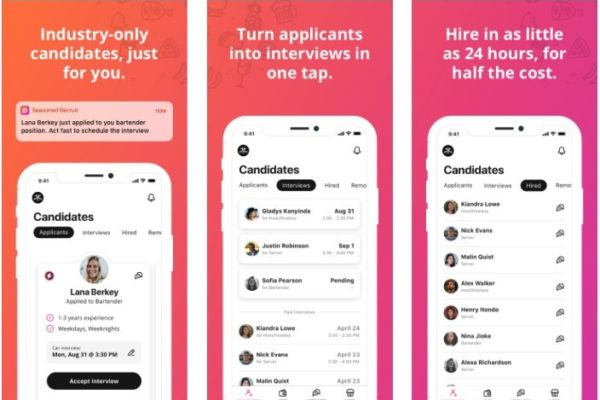